The very newest bios on the site

Newest Bios:
There are currently over 2,000 bios on the original Cushing's website and are slowly being converted to the newer CushingsBios.com format. 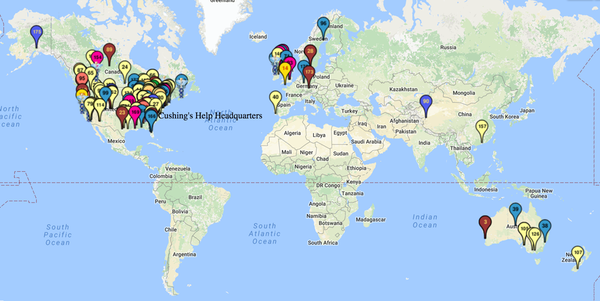 Add or Update your bio here

Names in parens are user names on the message boards

New Bio December 31, 2019
Alicia (Alicia) is from California. She is 18 and has been diagnosed with PCOS but it does not explain all of her symptoms. She used to be super athletic and played 3 sports. She got my period at 13 and it was regular. However, she started losing her periods...

New Bio September 8, 2019
Mike H is from Carrollton, VA. His adrenal glands aren't working so he has to take prednisone, which has now caused Cushing's.

Golden Oldie Bio September 7, 2019
Roberta "Bert" P was in pain, gaining weight, have moon face, etc. She had Fibromyalgia for over 4 years and was lucky to have a very good doctor for that who is a specialist in his field.

Golden Oldie Bio September 1, 2019
Elaine had a tumor in both the pituitary gland as well as the adrenal gland.

New Bio August 26, 2019
Barbara S (Babs1953) is from Columbus, Ohio. She was finally diagnosed in February 2019 and had surgery mid March to take left adrenal. She is still on 3mg prednisone daily and still has symptoms.

Updated Bio August 21, 2019
Louise is from Portland, OR. She has ACTH independent bilateral adrenal hyperplasia.

New Bio August 20, 2019
Wendy I is from Grand Rapids MI. She is newly diagnosed (5/2019) with a pituitary tumor, waiting for appointment at the University of Michigan on 9/26.

New Bio August 15, 2019
Patricia's Daughter is from Austria. Her 15-year-old daughter is in a lot of pain and has had many symptoms of Cushing's since January 2018.

New Bio August 13, 2019
Jennifer P's Daughter is from Dallas, TX. She is mom to a beautiful 13 year old girl who has struggled with her weight for years. After slowed growth doctor diagnosed her as growth hormone deficient and she has done injections for almost a year.

New Bio August 12, 2019
Amy G is from Ogden, Utah. She has been diagnosed with Cyclical Cushings Disease with Empty Sella Turcia. 1/4 sized damaged pituitary. She also has rare complications with my Cushings Disease and is having trouble finding the right doctors in Utah.

New Bio August 3, 2019
Taylor D is from Florence SC. She was a healthy young adult when she started as a student at the University of South Carolina in the fall of 2015, but soon into her college career, she began experiencing several symptoms, such as weight gain, insomnia and panic attacks. Davis spent the next three years going from doctor to doctor trying to get a diagnosis for her symptoms.

New Bio July 29, 2019
Kendra D is from Calgary, AB, Canada.. Her issues started with a left adrenal gland in 2014. She hopes to have an adrenalectomy soon.

New Bio July 21, 2019
EvE7070 is from Tucson, Arizona She was finally diagnosed withĘCushing's in 2015. She had pituitary surgery and was in remission. At the beginning of 2019 her endo said that Cushing's has returned.

New Bio July 15, 2019
Gina is from Illinois. She has PCOS and a 2mm pituitary microadenoma. She needs a new endo.

Updated Bio July 5, 2019
Lili is from Florida. She updated her bio after her pituitary surgery.

Updated Bio June 23, 2019
Lili is from Florida. She ihas been diagnosed with pituitary Cushing;s and added her Helpful Doctor.

New Bio June 18, 2019
Melissa is from Asheville, NC. She was diagnosed with Cushing's Syndrome about 4 yrs ago at 40 yrs old. She was told it was due to the steriods my Neurologist prescribed for Trigeminal Neuralgia and other severe facial pain.

New Bio May 25, 2019
Nikki is from New Zealand. She is one of the very few New Zealanders with Cushing's syndrome, a very rare disease caused by excess production of cortisol. Long afflicted by skin disease psoriasis, she had been prescribed the steroidal cream Dermol.

New Bio May 17, 2019
Lili is from Florida. She is testing for Cushing's due to many symptoms. She shares some of her test results. Lil has had thyroid cancer.

New Bio April 26, 2019
Cynthia M is from Ruckersville, VA. She is testing for Cushing's due to many symptoms. She also has Lupus, Sjgrens, Hypothyroid, High BP, Arthritis and Fibromyalgia.

In the Media
Sharmyn had pituitary Cushing's and is in remission. This is a compilation of some of her interviews and videos.

New Bio March 6, 2019
Sheryl is from Florida. Her journey started about 7 years ago with severe insomnia, muscle and joint aches. She was deteriorating so rapidly that I decided to go to LA and see Dr. Theodore Friedman (Dr. F).

New Bio February 27, 2019
Barbara S is from Columbus, Ohio She has been experiencing symptoms since the mid 1990s. Barbara spent almost four years on high doses of steroids for a brain tumor, and had difficulty being weaned off.

New Bio January 27, 2019
Nicole S (NicoleS) is from Toronto, Canada She is 37 years old and was diagnosed with Cushing's disease in May 2017 after suffering through a high risk pregnancy, early delivery and postpartum pain. She had a left adrenalectomy.

New Bio January 27, 2019
Tim D (TimD) is from Middletown, Connecticut. He is glad he's finally getting tested since he's sure he has Cushing's.

New Bio January 25, 2019
Michele M (Michele) is from Buffalo, NY She had her right adrenal gland and a pheochromocytoma removed. The Pathologist and endocrinologist diagnosed her with Cushings Disease.

New Bio January 7, 2019
Stefanie is from Michigan She was diagnosed in 2012 and had pituitary surgery done 2013. She is currently on medications.

New Bio January 5, 2019
Nicola C (Nikkikicks) is from Denver, Colorado She was in a car accident in 7/17 and had prednisone. That is when her symptoms started.

No forms of advertising are used on Cushings-Help.com.
All site features are available free of charge. But donations are gratefully accepted!